The First Sheriff of Ford County 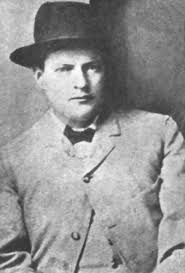 Charles Bassett was chosen to serve as the First Sheriff of Ford County on June 5th, 1873 with his undersheriff Bat Masterson. He was re-elected twice, serving until 1878.

One of the many men who served the law in the wicked little town of Dodge City, Kansas, Bassett hailed from New Bedford, Massachusetts and fought with the Union Army during the Civil War. Mustered out at Fort Still, Oklahoma, Bassett stayed out west, settling in Dodge City.

On June 5, 1873, he became the Ford County Sheriff. Working with Under-Sheriff, Bat Masterson, the pair pursued Sam Bass following his holdup of a Union Pacific train in Big Springs, Nebraska in 1877. Bassett served two consecutive terms as sheriff, but when a local ordinance prohibited him from running for a third term, Bat Masterson became the Sheriff, appointing Bassett as his under-sheriff. When Bat's brother Ed, who was serving as Dodge City Marshal, was killed in April, 1878, Bassett replaced him. During the time he worked as marshal, both Wyatt and James Earp worked as deputies for him. Bassett was on hand for the Loving-Richardson Shootout in the Long-Branch Saloon on April 5, 1870. After resigning as Dodge City's marshal in November, 1879, he moved to New Mexico, where he worked as a guard for Adams Express Company. The next year he was mining for gold in Montana before wandering about Colorado and Texas and making frequent trips back to Dodge City.

Finally, he settled in Kansas City, were he worked in and owned a number of saloons. He returned to Dodge City in 1883 when Luke Short was in a dispute with city authorities and called in all his friends for support. Bassett died at Hot Springs, Kansas on January 5, 1896.

The first ten years in Dodge City were the years that build the wild and wicked reputation that Dodge City has held since its beginning in 1872. The city's population that first year, which totaled 500, was due almost entirely to the buffalo trade. The buffalo hunters and the soldiers from Fort Dodge came to the city to buy supplies, drink, and to play away their boredom.

Even though the Town Company had organized in August of 1872, the still unincorporated city had no elected or appointed officials; the county government had not yet been organized and consequently there were no courts, jails, or official law enforcement nearby. The closest was in Hays City over 100 miles away. From August 1872 to July 1873, there were approximately thirty killings in Dodge City.

By February of 1873, a Vigilance Committee was organized. These men were usually hired guns brought in by the people to protect their holdings. In the next four months this committee killed two men, ran five others out of town, and brought in a buffalo hunter named McGill who had been shooting up town. By June 1873, the Vigilance Committee had attracted disreputable members, even though it was originally created for the public good.

On June 5th, 1873, a special election was held and Charles Bassett was elected to serve as the First Sheriff of Ford County. As his duties increased, he appointed deputies among whom were Wyatt Earp & William "Bat" Masterson. Masterson would continue later on to serve has Sheriff from 1878 - 1880. After Dodge City's incorporation in 1875, Lawrence Deger was appointed as the First Marshall of Dodge City.
Emergency Management
Notify Me
Employee Resources
Departments
Employment
[]